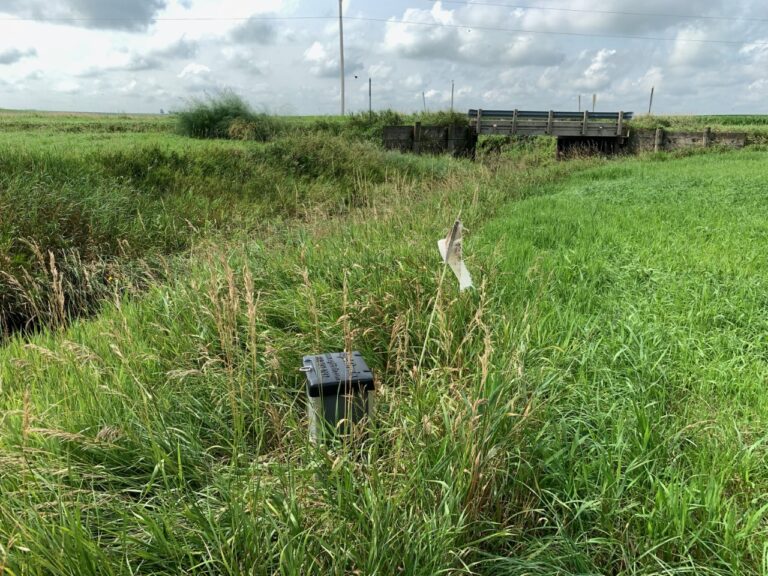 Remove the burdens for farm landowners to install voluntary water quality projects, and they sign up quickly. In fact, word-of-mouth project success has almost created a waiting list as 2023 project signups continue.

Instead of installing one bioreactor or saturated buffer a year since 2015, Polk County Soil & Water Conservation District (SWCD) created and implemented a scalable system to add 51 of these edge-of-field (EOF) practices in 2021.

The innovative model framework shifts all the details of site planning, government approvals, contractor hiring and project funding from the landowner to the city or county fiscal agent. And it pays the landowner a fee for private land access during installation.

To reach the goals of the Iowa Nutrient Reduction Strategy (NRS), more cities are partnering with farm landowners to improve nitrate removal efficiency. Saturated Buffers and Bioreactors can reduce nutrients in the water by 40 percent or more, so they’re a key part of the NRS, but they can be expensive and involve a lot of planning.

Polk County Watershed Management Authority Coordinator, John Swanson, knew farmers could make a bigger difference if his team helped them to do it faster.

“We hope to double last year’s success, and we currently have 85 EOF projects ready to go, with 30 of these in Story County,” he said.

In 2023, he hopes they can install 100 or more projects in four counties: Polk, Story, Dallas, and Boone. Since the process takes a year, landowner signups for 2023 are starting this March.

As the model grows, conservation agronomists from Heartland Co-op are getting involved in the process to increase their success rate even more.

“Among their landowner customers who had fields that fit EOF practices, their agronomists had a 90% success rate of gaining access to survey and eventually install these structures,” Swanson said.

She spearheaded this blitz among three watershed management authorities (WMA): Fourmile Creek, Ioway Creek and Headwaters of the South Skunk.

“It cost zero dollars for the owner and there is no loss of tillable farmland. The city of Ames works as the fiscal agent to handle all financials, paperwork, and contractors. So, there’s really no downside, only improvements in water and soil quality,” Carmichael said.

“This is the first time I’ve heard of such an approach. Bundling these Edge-of-field practices together into one large bid package and having a central fiscal agent manage the funding from various sources makes sense,” Weiss said. “This project is a great example of how municipalities can work together and partner with landowners to improve water quality and increase source water protection.”

The key to the success of this project has been the partnerships and support from Polk County, Story County, Iowa Department of Agriculture and Land Stewardship, and Heartland Co-Op. “A major component of success involves enrolling landowners into the program. The established relationship between landowners and Heartland Co-op has been critical to enrollment. Without Heartland’s involvement, selling this project to landowners would be much more difficult,” Weiss said.

Ruth McCabe, Conservation Agronomist with Heartland Co-op, was a skeptic of government progress to promptly put projects in the ground—until she talked to John Swanson and learned of their blitz program during a 2020 meeting.

“We embraced Polk County’s fantastic program. It’s an easy button decision for farm landowners because the huge project workload and funding has shifted to Polk and Story County, NRCS and the city of Ames,” McCabe says.

“Heartland is very excited about saturated buffers and bioreactors because they are a very non-invasive conservation practice for the farmer and landowner,” she says. “This project also helps us sell other conservation projects—from buffer strips and CRP to cover crops and wildlife habitat—which benefit our grants from the Iowa Soybean Association and National Fish & Wildlife Foundation.”

None of this effort would be possible without the funding and commitment from the Iowa Department of Agriculture and Land Stewardship (IDALS), along with federal, city, county, conservation organizations and private partner money.

“This innovative framework and fiscal agent process have achieved more successful edge-of-field installations in one year than in the previous six years. It proves that scalability works,” says Sean McMahon, Director of the Iowa Agriculture Water Alliance (IAWA) and early promoter of this concept. “This public-private partnership is gaining steam across central and eastern Iowa, with inquiries coming in from neighboring states who want to adopt this model.”

Looking to the future

Swanson hopes this can be a model that expands in other parts of the state. He’s started training a team in Boone County so they can continue progress without Polk County’s help in the future.

According to Swanson, another unique project is starting up in the Cedar Rapids area in the Middle Cedar watershed. “Multiple counties are trying to set up a very aggressive blitz program, with many landowner fields surveyed and final permissions achieved. They need more labor and time to pull off this project scale,” he adds.

That’s why Swanson is thinking even bigger. He wants to shorten the year-long process and remove some unnecessary work, so they can increase the pace of water quality improvements even more.

“We’re still working on a few kinks on the labor side, bringing in consultants who can complete conservation plans to assist overwhelmed NRCS engineers,” he adds. “Fortunately, the more projects we do, the faster and more efficient we become. But we hope IDALS and NRCS can help shorten this year-long project process even further.”

As a new watershed coordinator in Iowa, Sara Carmichael says this is the best partnership she has ever witnessed. “Federal, city, state, county, and private—everyone is working together. It’s awesome to be a part of it,” she adds.