A one-day, deep dive into cover crops for more than thirty ag retail managers and their agronomists was held at the Iowa Soybean Association in March. This in-depth workshop was designed to help ag retail agronomists field questions on cover crops and soil health from their farmer-customers. The workshop featured top national experts and leading farmers on the use of cover crops to build soil health and improve water quality.

Sean McMahon, Iowa Agriculture Water Alliance (IAWA) Executive Director, set the theme of the meeting by sharing the advice of hockey icon Wayne Gretzky to ‘skate to where the puck is going to be’ in terms of the rising importance of cover crops and soil health to a variety of audiences, including farmers, consumers and food and beverage companies. McMahon also discussed economic opportunities for ag retailers to increase their market share and improve customer satisfaction by offering cover crops services in addition to conventional agronomic services.

The event was co-sponsored by IAWA and the USDA-Sustainable Agricultural Research and Education (SARE) program and organized by Dr. Rob Myers of the North Central regional office of SARE and professor of agronomy at the University of Missouri. Certified Crop Advisors (CCAs) earned 6 continuing education credits (CEU’s) for attending the workshop.

The Business of Cover Crops: Trends and Opportunities 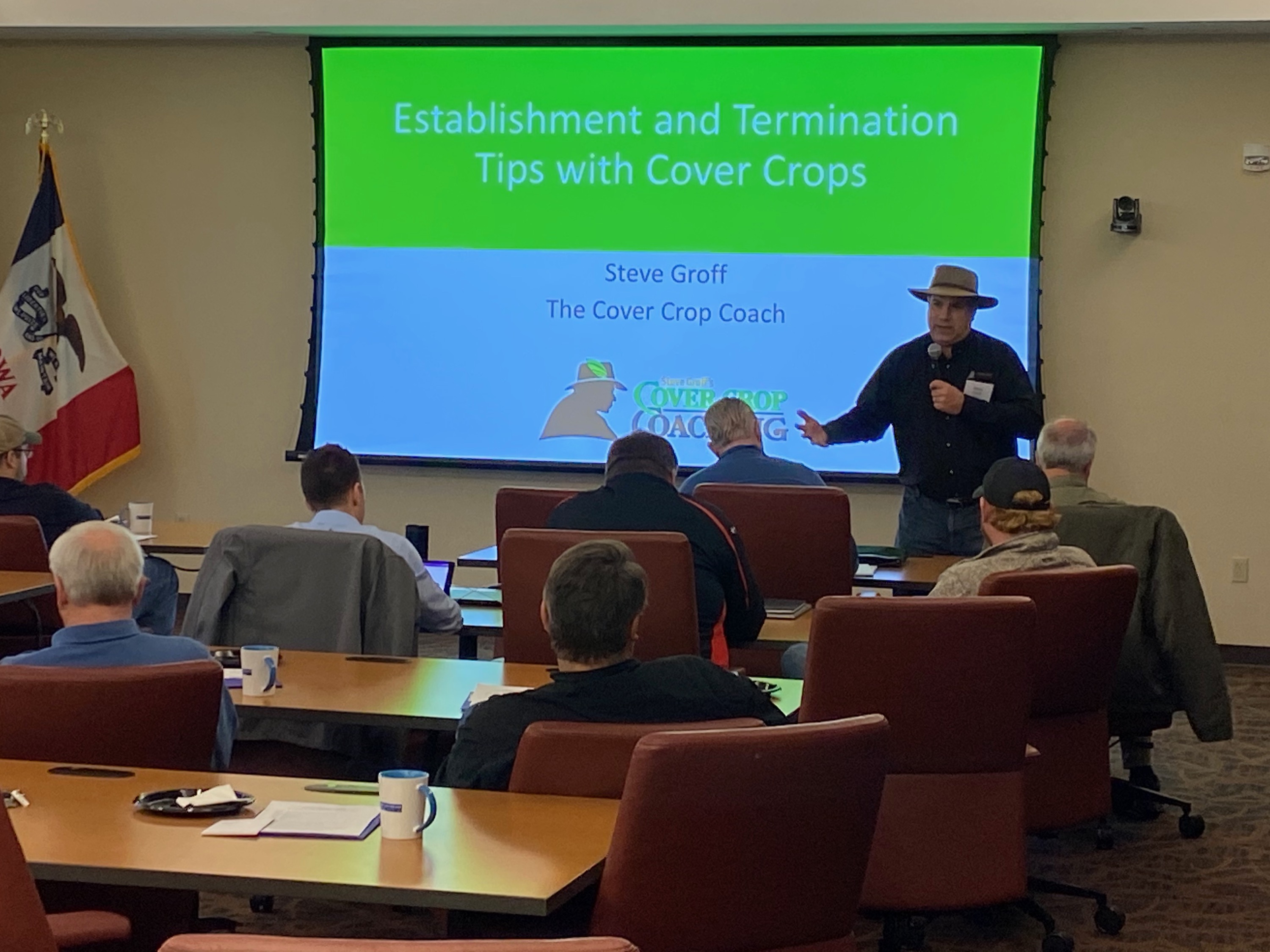 The workshop included a panel discussion with Mark Mueller, a Waverly, Iowa, farmer and Jason Gomes of North Iowa Agronomy partners (NIAP).  Mark noted that with the improved trafficability of his fields with cover crops, he is able to spray on the rare but crucial calm days that may follow a wet period when those with conventionally tilled fields and no cover crops can’t turn a wheel. This is also a key advantage for ag retailers, who may seek out producers with cover crop fields to spray when they would otherwise be idle, waiting for fields to dry.  Jason noted that producers can’t count on cover crops necessarily ‘paying their way’ every single year, but it is important to focus on the wide array of benefits, and not just the costs.

Steve Groff is recognized as one of the top U.S. experts on cover crops, having used them on his own farm for over 25 years. He has spoken on cover crops all over the world and is known as a highly effective educator on cover crops, addressing both tips for success and potential pitfalls.

Dr. Rob Myers is an agronomist at the university of Missouri and serves as the national cover crops and soil health liaison for the USDA-SARE program.

Jo LaRose is a University of Missouri extension educator with an M.S. in entomology. He has developed particular expertise on potential issues with cover crops related to slugs, voles, and other pests, and also how they impact pollinators and wildlife.

Alan Weber is a consulting ag economist who has worked with the SARE program to develop a national report on cover crop economics and on past survey efforts. He also operates an 800 acre grain and beef farm in west central Missouri where he uses cover crops for soil improvement and grazing.

Dr. Todd Peterson is a consulting agronomist who works with ag retail agronomists on practices that build soil health and reduce nutrient losses. He has a diverse background in both the public and private sector, having worked at Pioneer Hi-Bred, Land O’Lakes, The Nature Conservancy, and the University of Nebraska.